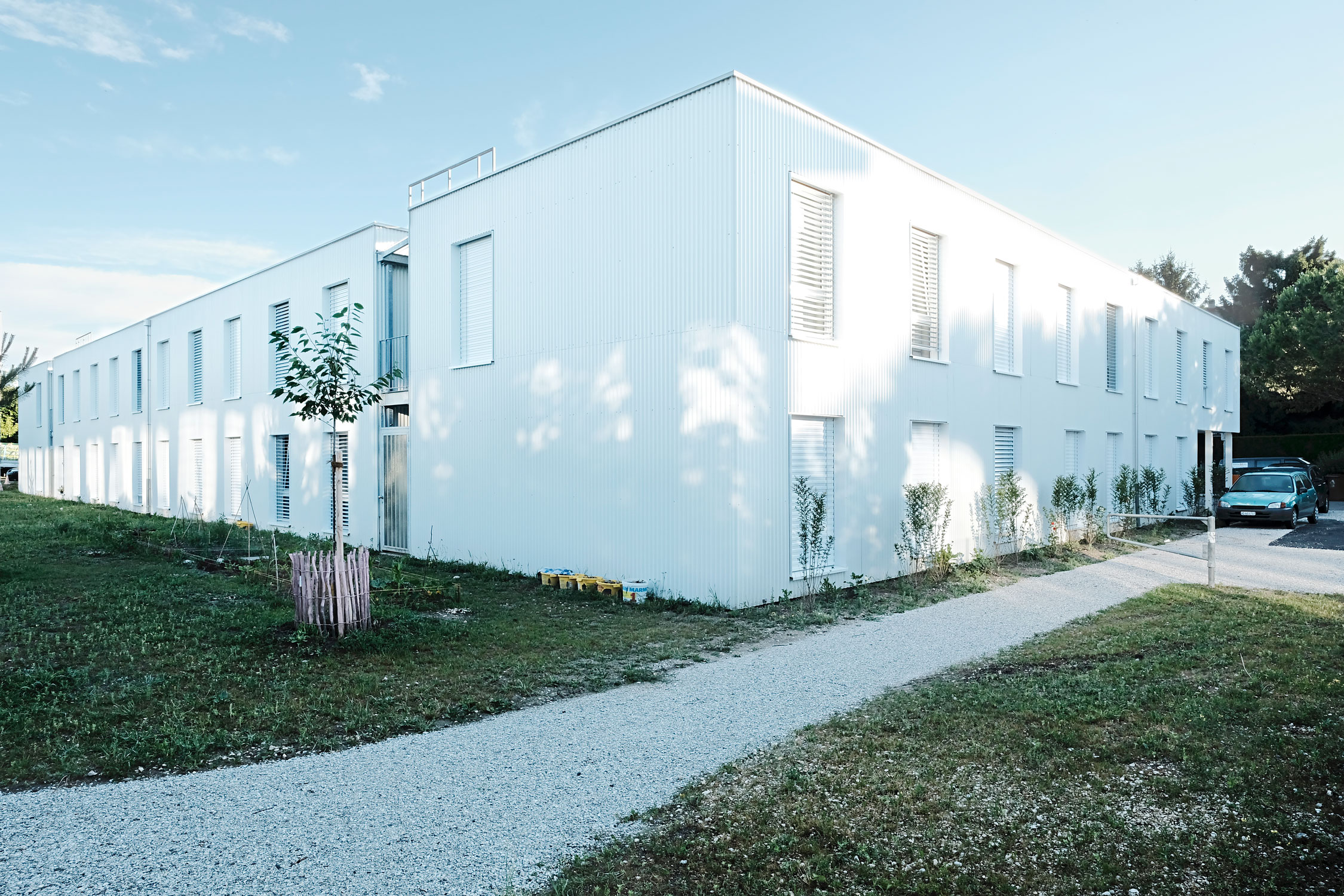 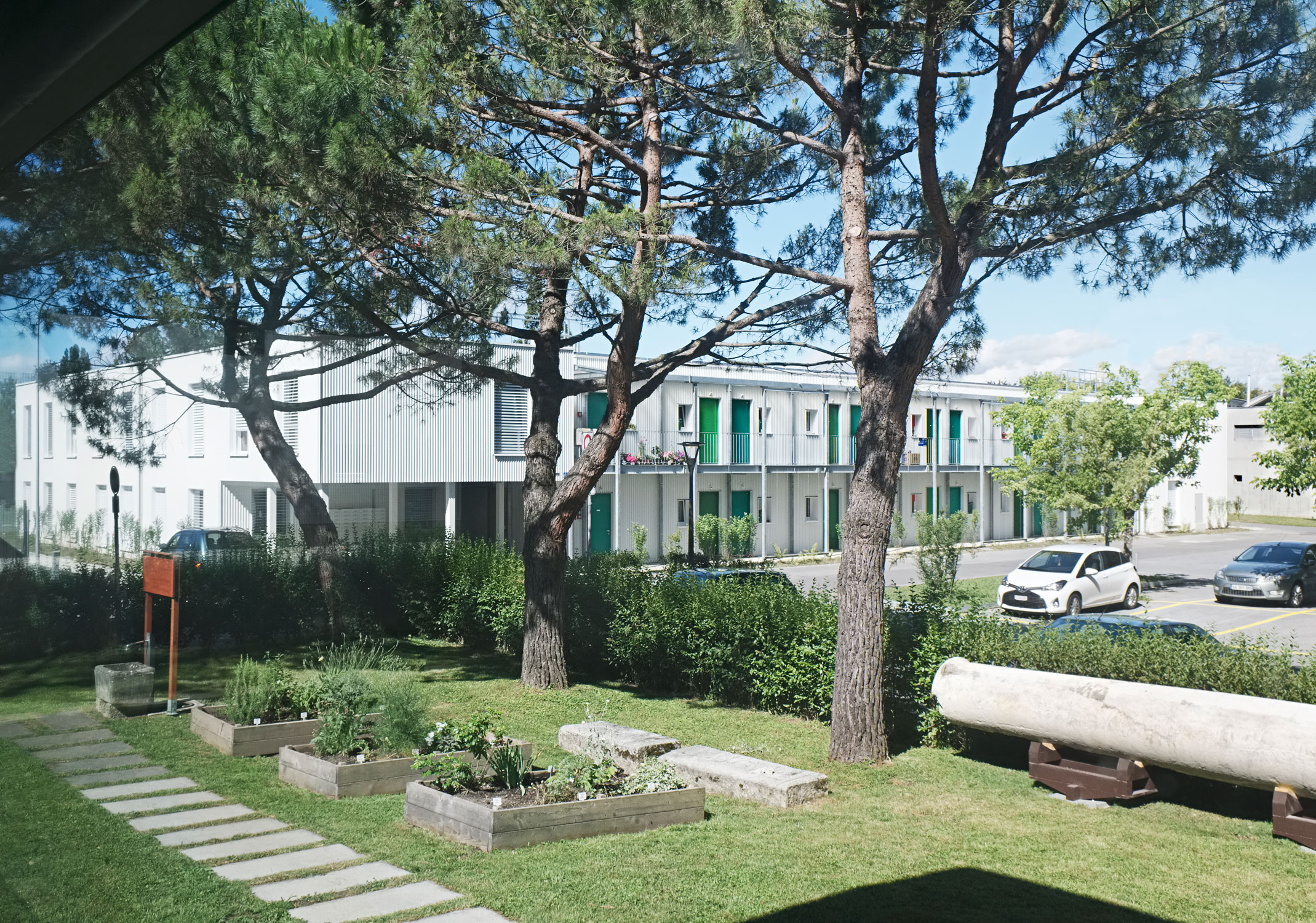 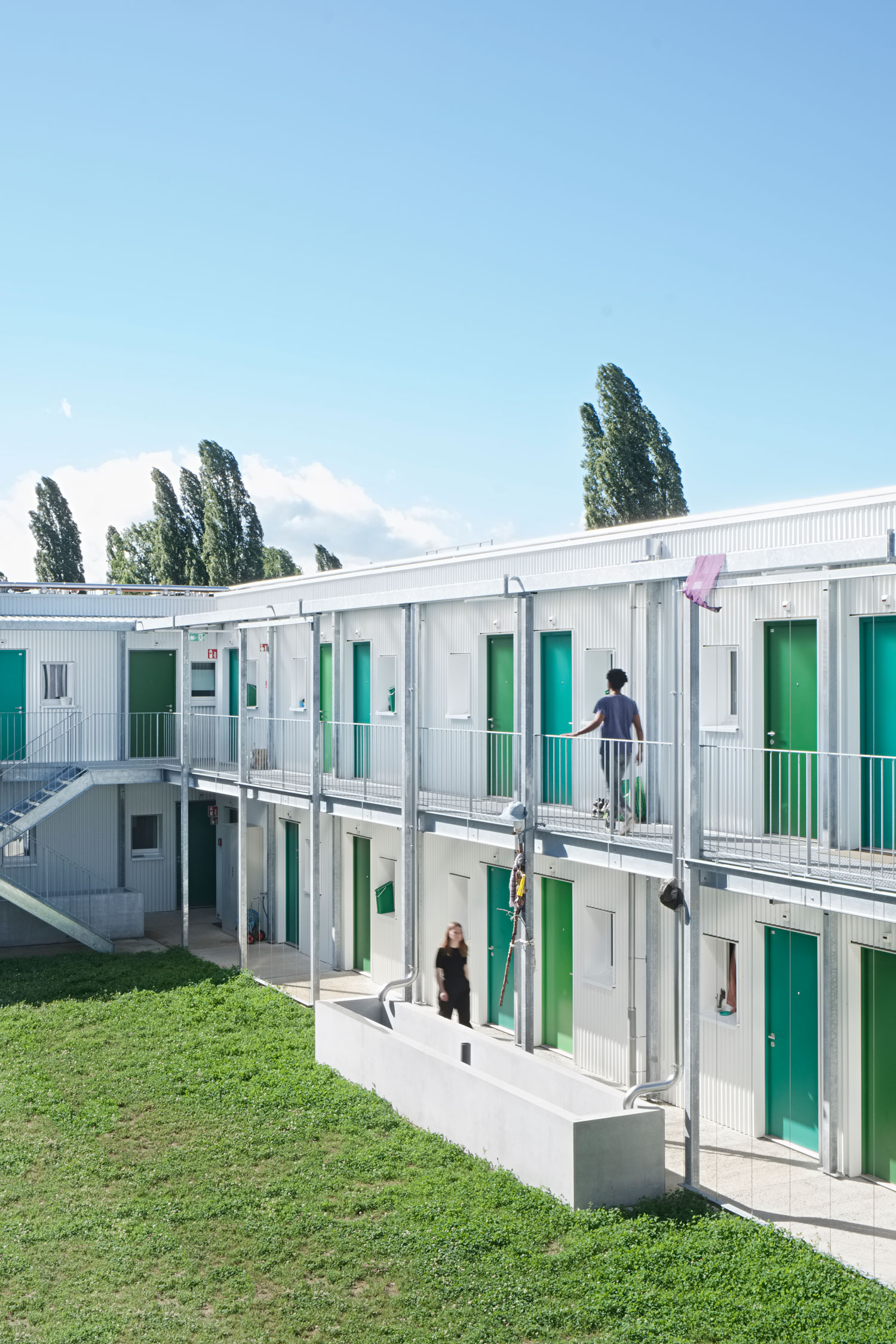 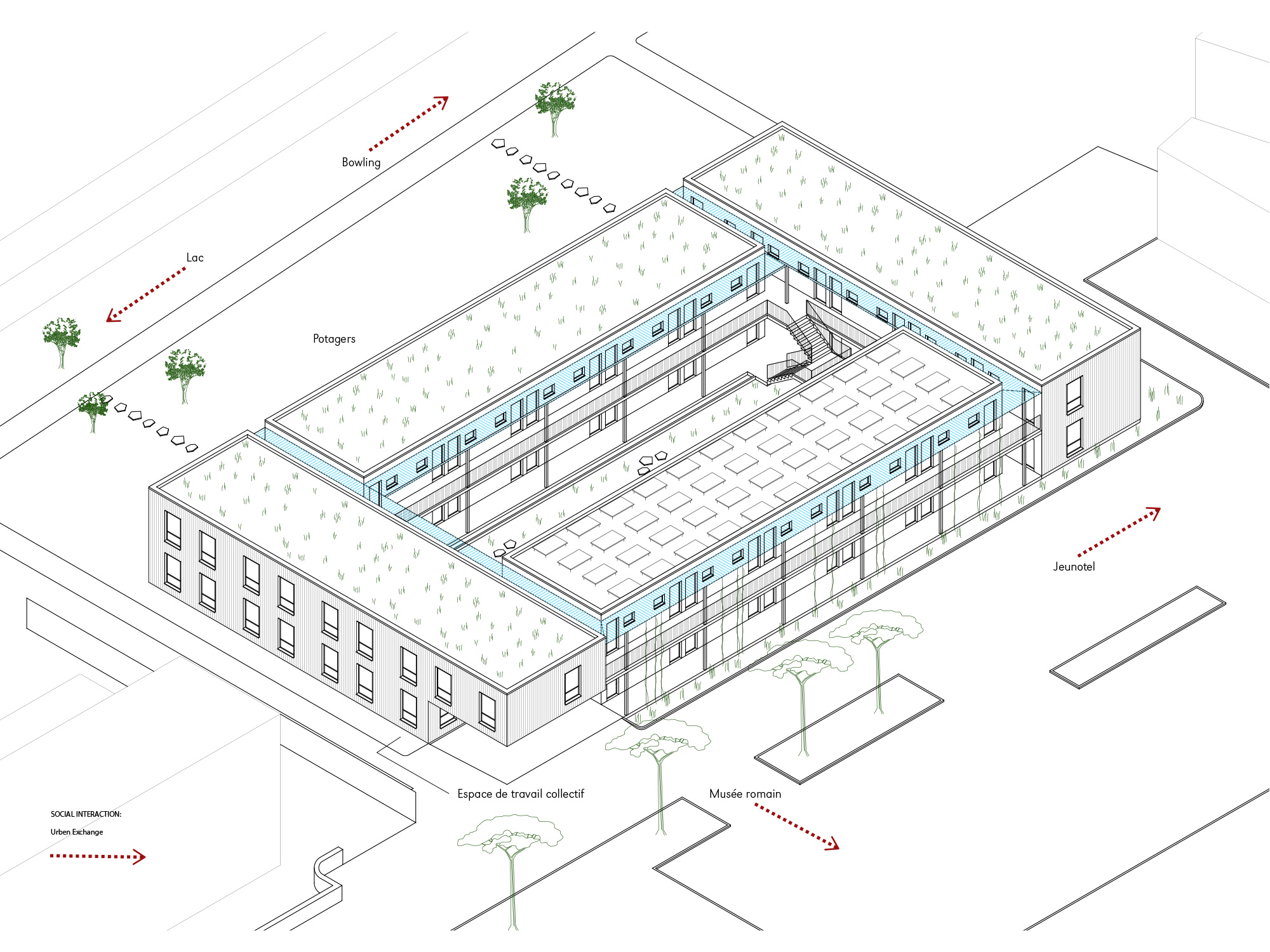 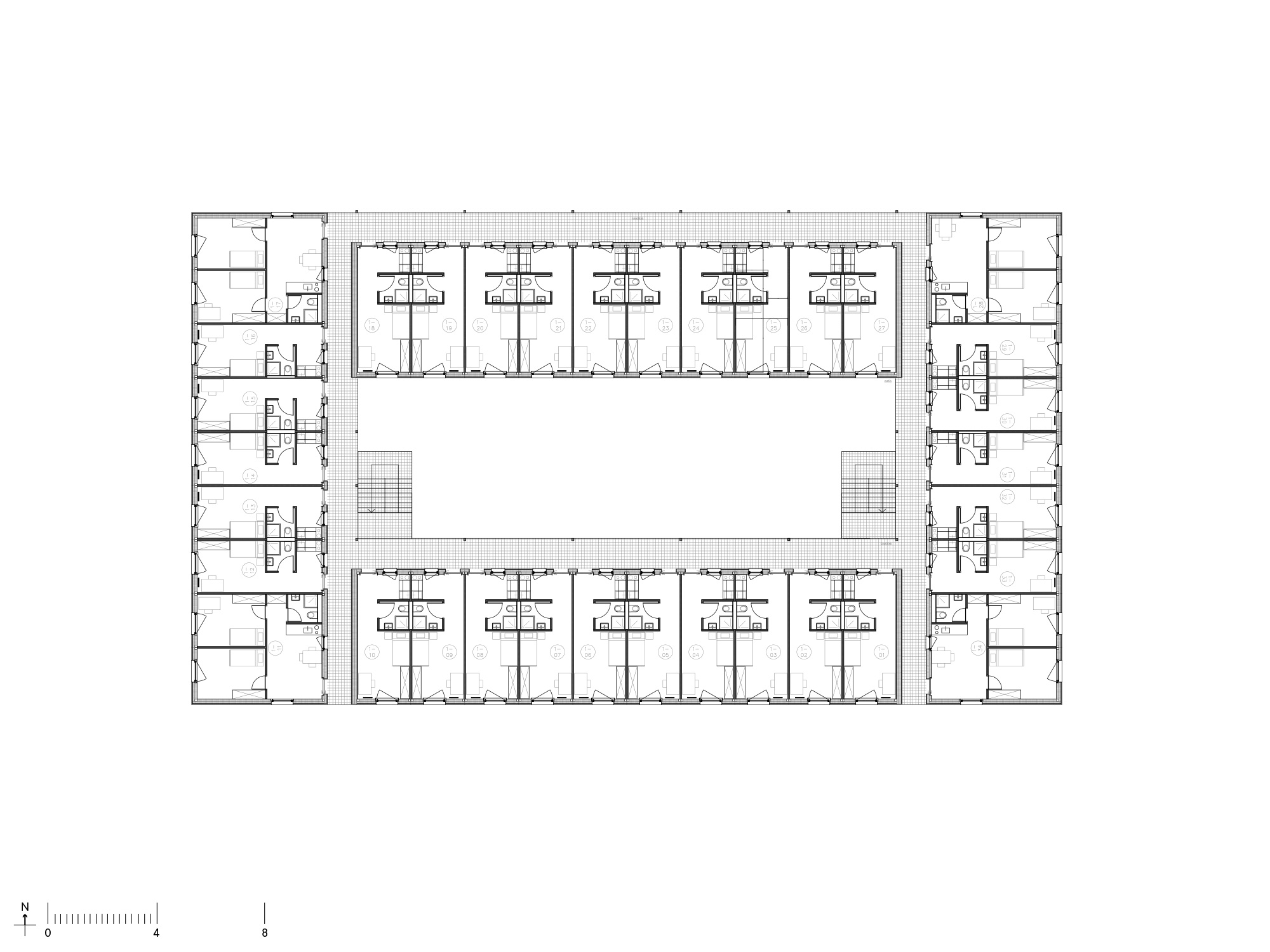 In order to face the housing shortage in the Lausanne region and to facilitate the reintegration of people on the margins, since 2012 we have been developing a temporary accommodation project in partnership with the City of Lausanne’s Social Service and the Cité Derrière Cooperative.

In Prés-de-Vidy, it is a question of occupying a plot of land in the city for a fixed period of time with a temporary building. The modular construction makes it possible to build a movable and transformable building that can easily be relocated to another site.

The apartments offered are mainly intended for single people or divided families. These apartments offer decent accommodation conditions until these people can return to traditional housing.

Each apartment is oriented towards sunlight. The distribution corridor does not follow the urban form, but the lighting needs of the apartments. From the corridor you enter the apartment through the kitchen. A small window creates the neighbourhood transition between these two spaces. The floor plan of the apartment is articulated by the bathroom.

The living spaces are all very colourful. It is the colours of the Roman mosaics, found a few metres away, that inspire the choice of ambiences.

The building is not a solitary, but a system integrated into its environment. It is designed to allow neighbours to meet, rain to filter, fruit trees to give the rhythm of the seasons, inhabitants to create a “home” for themselves that is conducive to reintegration into civil society.

It is here that 62 housing units have been built for the right to the city for all. In Prés-de-Vidy, we have diverted our construction system to allow the creation of a large number of studio type housing units. However, our system could be proposed on other plots and for other types of user groups and it could participate even more in the densification of cities by offering living spaces to as many people as possible.